The 2018 KHS Grit 110 is a surprisingly well built bike with an impressive list of components for the price (Caveat: I purchased the bike two weeks before the mid season price increase went into effect). Still - in my humble opinion the 'new' price of $975 is a steal for a bike of this caliber. The bike features mechanical disc brakes, internal cable routing, and a carbon fiber front fork. It is a solid foundation on which you can build a legitimate gravel/adventure bike or with a few small upgrades you can use it to dip your toes into the gravel riding lifestyle. 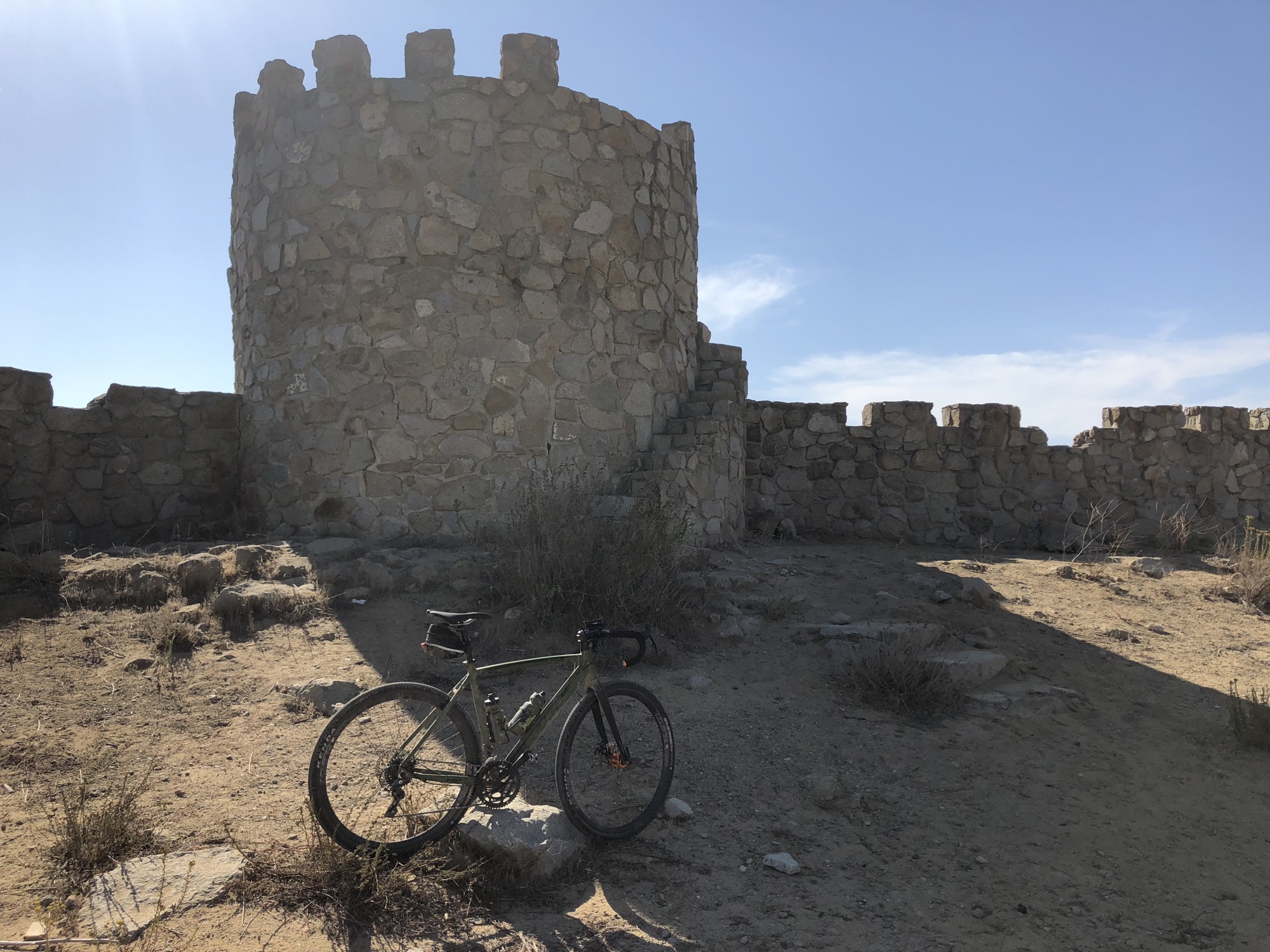 Off the bat I think a better set of wheels is a must. If your budget is really tight then just go for hubs. Everything else on the bike is good for general recreational riding. However, if you are going to do any races there are some upgrades I recommend (and that I am personally planning on making myself). I will cover that later in the article. 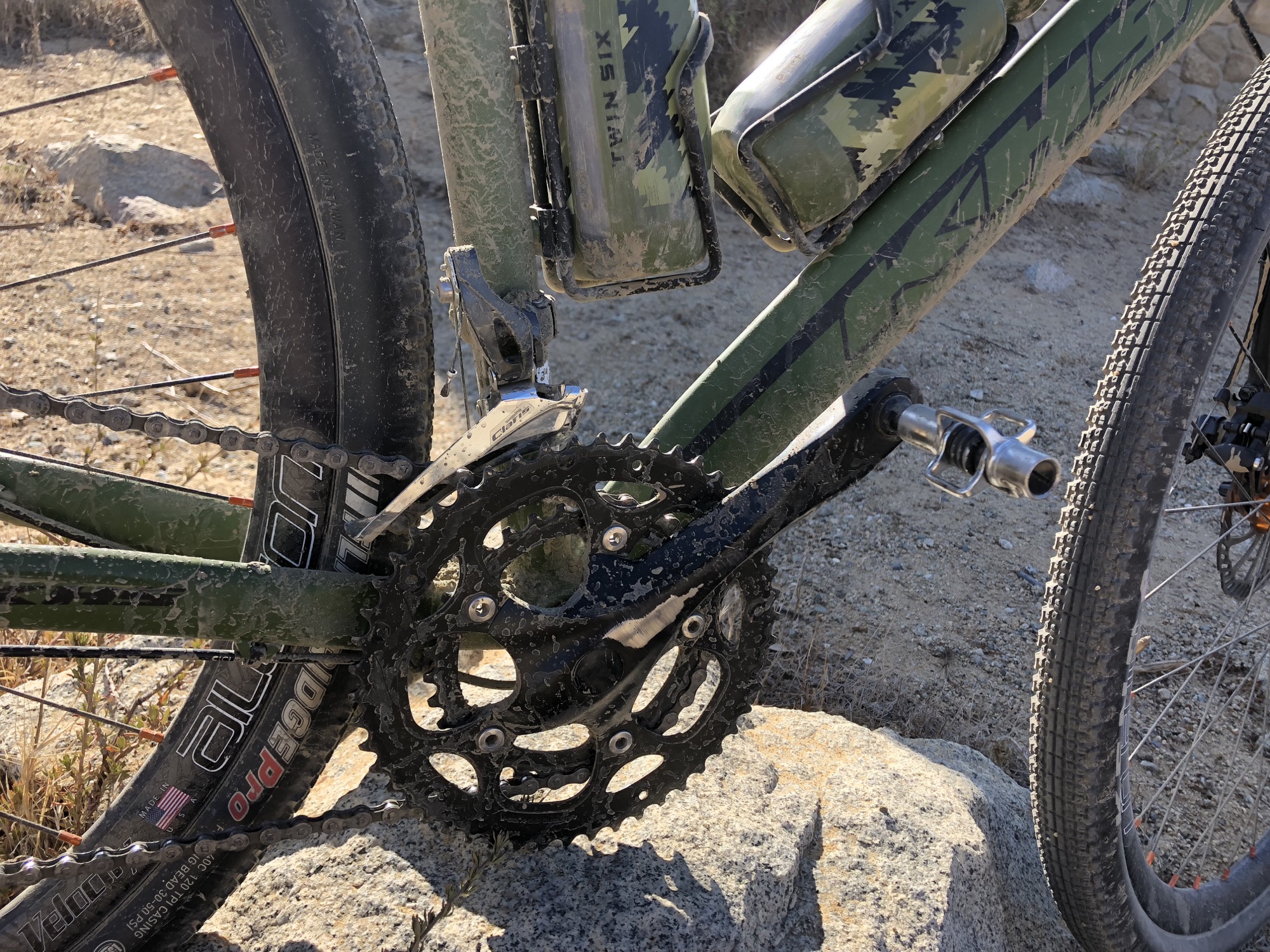 The only early maintenance issue I came across was needing to replace the bottom bracket. The factory bottom bracket was by far the most horrifically built component I have ever seen in my 20+ years as a cyclist. Mine lasted less than 300km before it kicked the bucket. A new (and better) one cost me $30. Also, according to Strava I put just under 1300km on my bike before I needed a new chain. For how much mud and dust I encounter on my rides though I felt this was a more than reasonable in terms of replacement time frame.

The bike comes stock with a 2x8 drive train - the crank's range is 50/34 and the cassette's range is 32/11. Coming from a SRAM Eagle 1x12 drivetrain (34x50/10) on my XC hardtail I was expecting to seriously dislike the gearing on the KHS Grit 110. I was pleasantly surprised to find that the Grit 110's gearing has proven more than capable for my needs. Sure there are times where one shift on the rear derailleur goes from 'too easy' to 'too hard' (or vice versa) and I wish I had an eleven speed. But in all honesty how big of a deal is this? To me it is something I can live with - I just go for the harder gear and get stronger instead of staying in my "sweet spot". 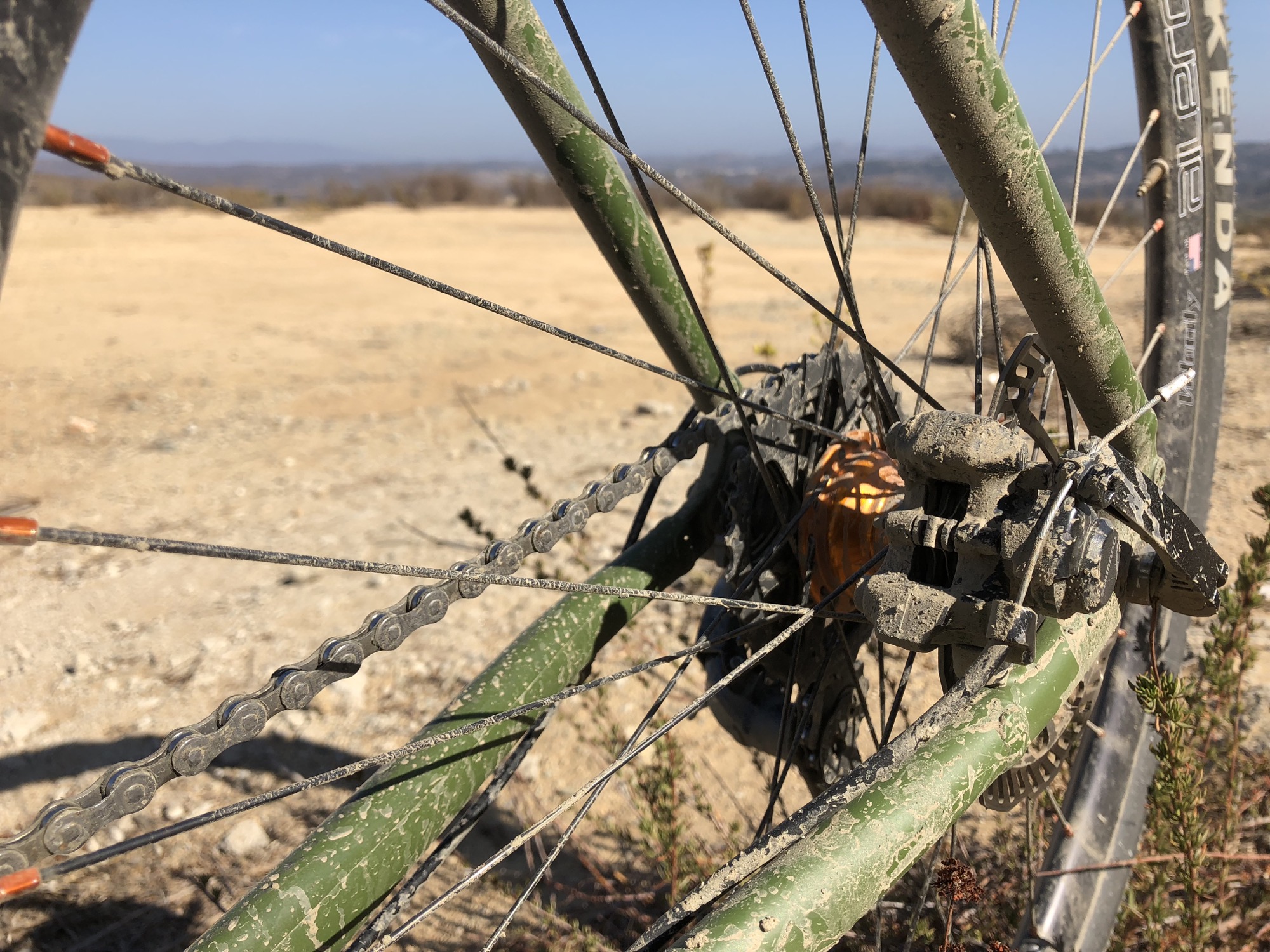 I have been seriously impressed by the Shimano RS305 flat mount disc brakes. They are quite capable stoppers and they are easy to adjust. I would be remiss though not to mention the one time I had the brakes fade out so bad I had to dive off of the bike. In the brakes defense it was 95 degrees out, the hill was 20% gradient, and I had not properly sanded the pads. After properly maintaining the pads I have never had any more issues regarding brake fade. I attribute the one time issue to inexpensive pads not being fully broken in. Consider yourself forewarned.

The cranks are kind of love hate for me. I hate them because they weigh 1189 grams (with the square tapper bottom bracket). I love them because they are bomb proof and have not given me any problems (I would have added this to the Upgrades paragraph above if it were not for how many kilometers I have put on them with zero issues...) It is a tough call though as top of the line cranks are expensive. I will discuss this more in the racing section later.

For reference, I am 5'11" 168 pounds and I opted for the M/55 sized bike. I am happy with the sizing, including the crank arm length (fyi - I have a longer inseam than my heights average). 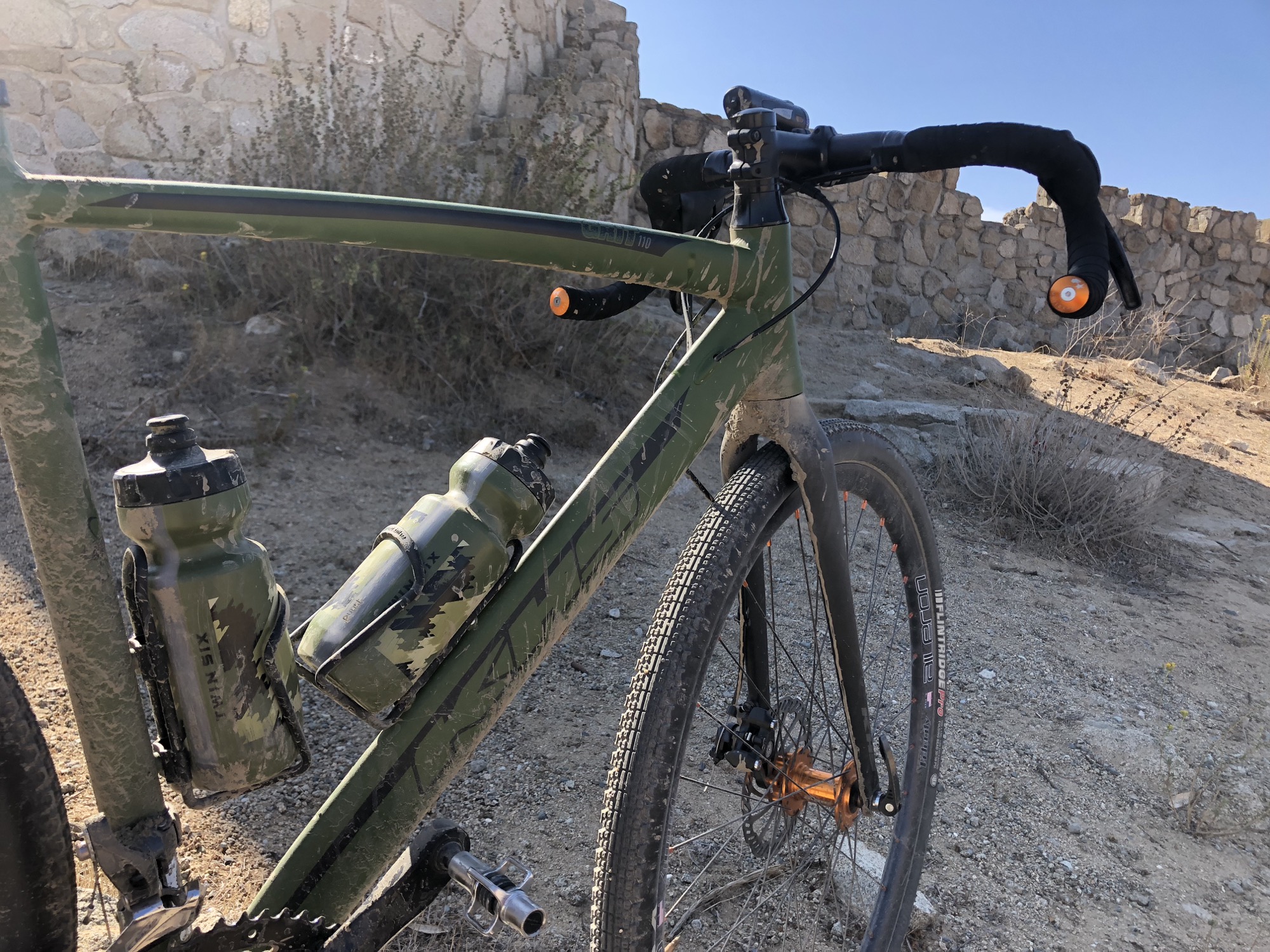 The weight of my bike with the new wheels came in at 25lbs (11.33kg). Definitely not a light weight bike. Stock weight is probably +26lbs (11.8kg) because I shaved over one pound by upgrading the wheels. Please, note that I weighed the bike with mud on it (see gallery below), two water bottle cages, Crank Bros Egg Beater pedals, a bike light mount (no light), and a Wahoo Elemnt BOLT mount (no BOLT).

Cockpit and the Drivetrain

The cockpit was comfortable, although I flipped the stem and dropped it a few spacers to give it a more aero profile. The stem, handlebar (FSA Adventure 46cm), seat post, and saddle have given me zero issues; in fact I like them - something I am not accustomed to with stock parts. 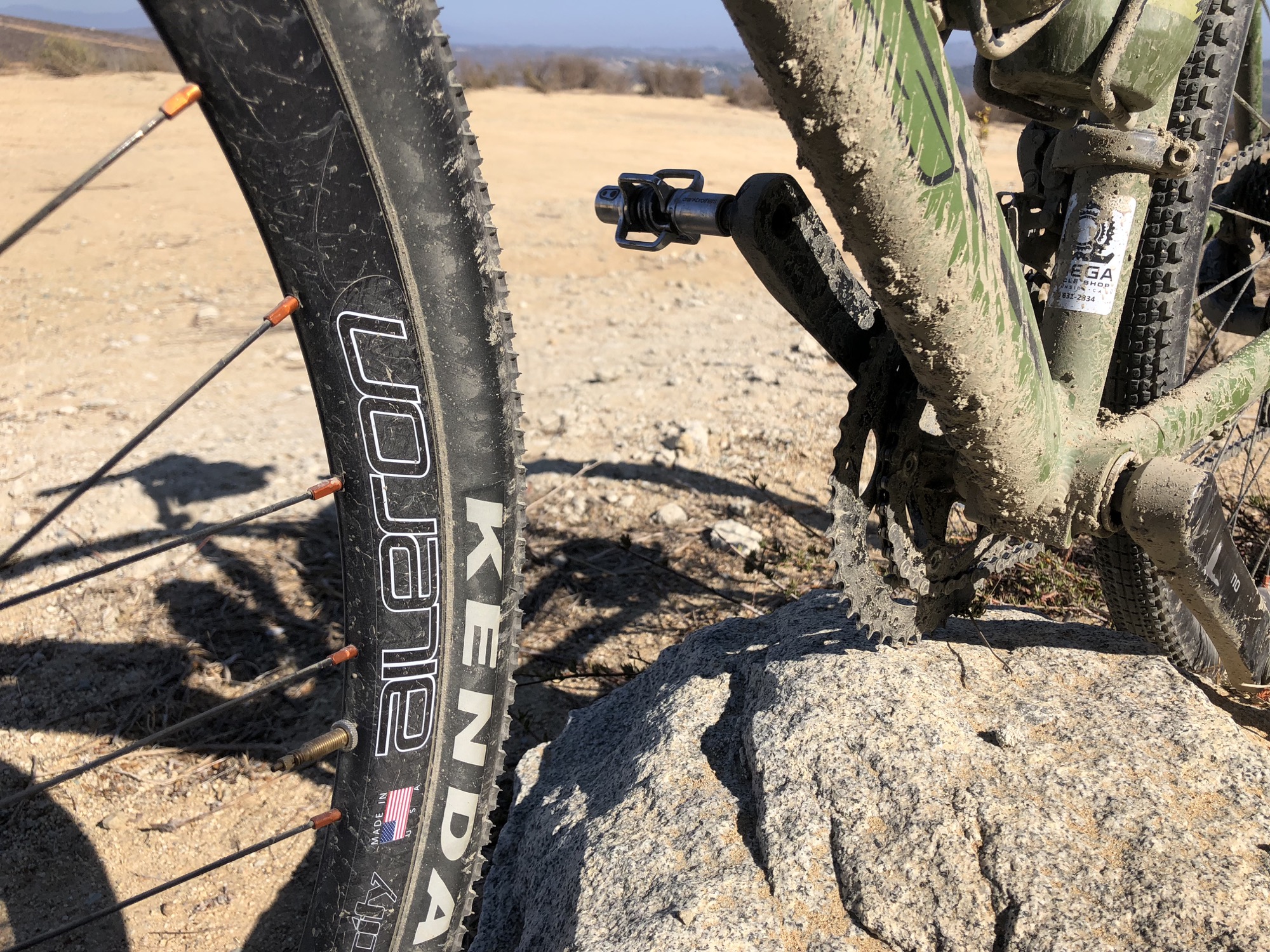 I have had zero issues with the headset (I repacked it once at 1000km).

As for the Shimano RD-R2000SS Claris derailleurs they have withstood a lot of abuse and have kept on ticking. I definitely notice the lack of a clutch but so far I have not dropped a chain. 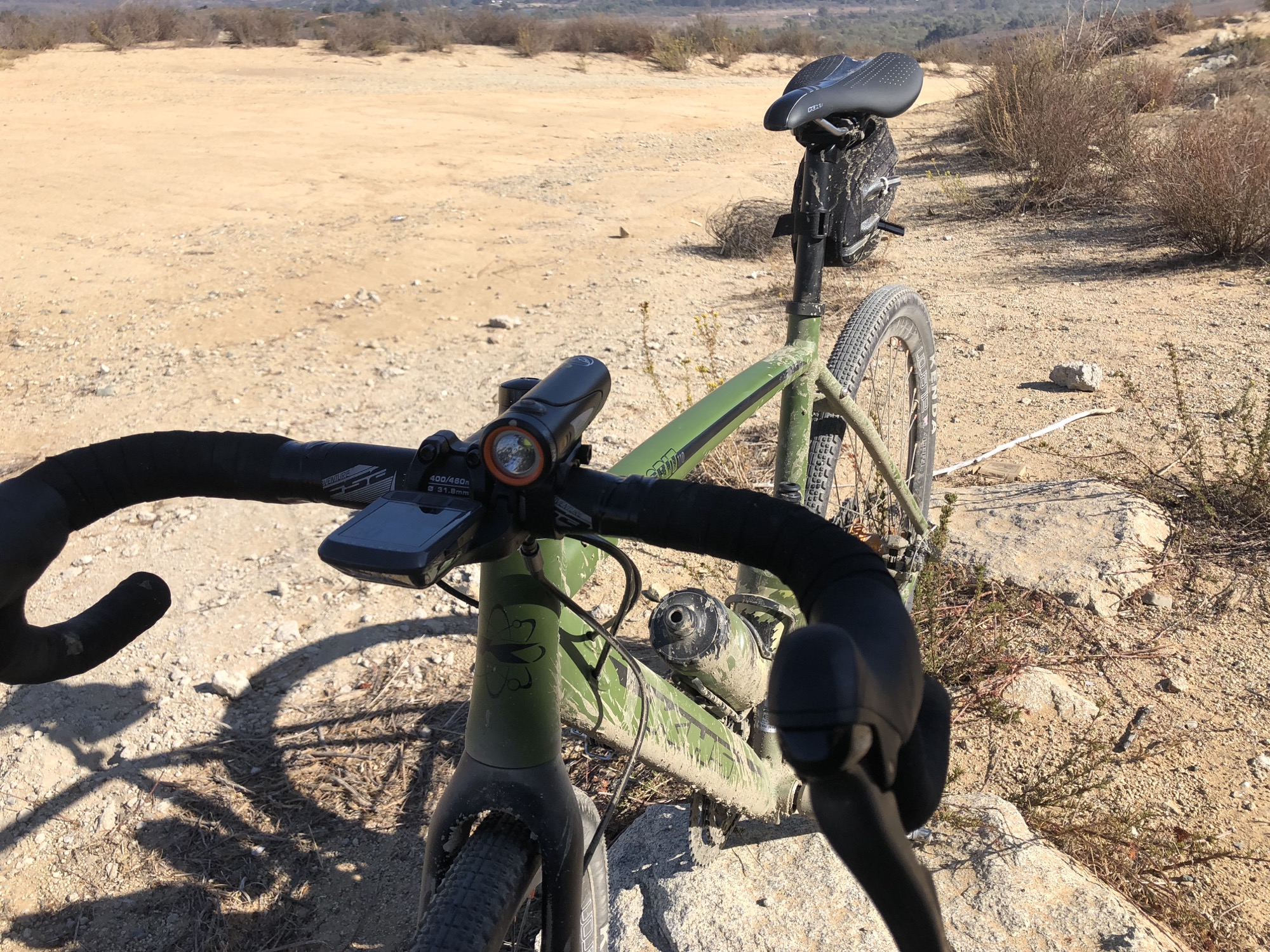 The tires which are Kenda Flintridge 40c 120tpi are awesome. I am so impressed with them that I just may get a new set when the current ones wear out. As an example: last week I rode Glendora Mountain Road for the first time. Early on in the ride I ran over a glass mason jar someone had deposited in the bike lane. I thought for sure my ride was over. It was not. The tires shrugged off the glass with no issue. I also read about someone using them in Dirty Kanza and not having any problems - so that is a positive endorsement right there.

I have noticed that after a day or two of not riding that the right brake lever seizes and I have to give it a good hard squeeze to pop it loose. This is probably a warranty issue as I experienced it from day one. I am lazy though and have not brought it into the shop for an assessment.

If you plan to race on this bike I would suggest a few more upgrades.

After wheels (obviously) I would say the crank is the next needed upgrade. The weight savings are just too much to pass up (read: almost half the weight by going to Ultegra!) 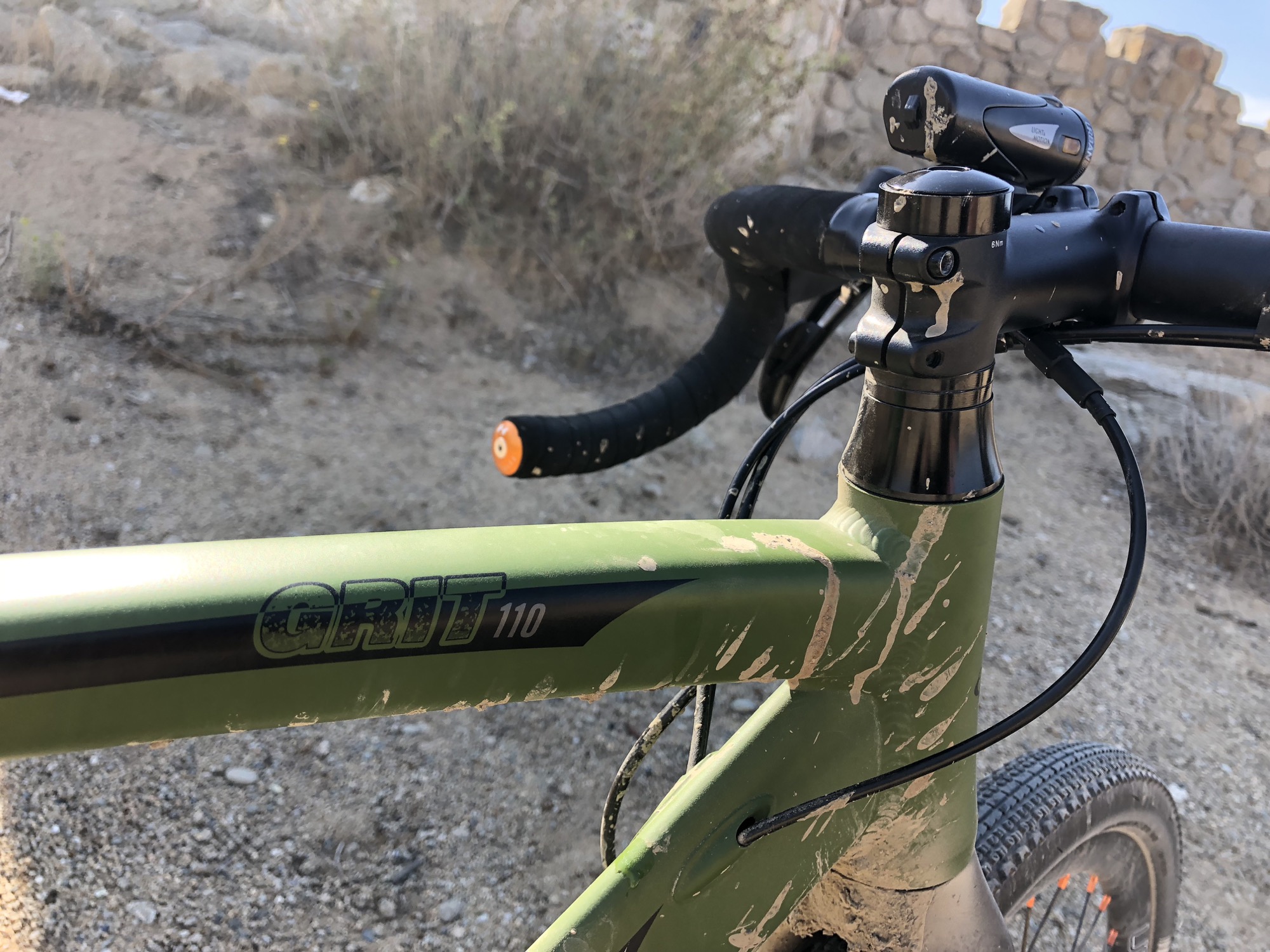 As for the 2x8 drivetrain, while it is good for general riding, a ten or eleven speed upgrade would be a good idea. That being said I felt great on Glendora Mountain Road with the 2x8 drivetrain. On the Nate Harrison Grade though I thought I was going to die (I am prone to exaggeration, this time though I seriously thought I might die). I am planning to upgrade to a 2x11, probably after upgrading the crank. I will keep the crank gearing the same at 50/34  (having a 30 or 32 chainring on hand though for heinous climbs is high on my purchase list too) but with an 11/36 SRAM cassette. Those four (4) extra teeth might not sound like a lot but I have a specific climb in mind for this particular gearing that will make the upgrade $ worth it.